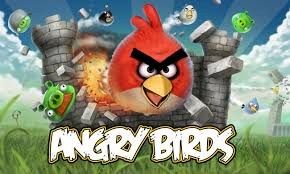 Angry birds are on the top lists of video games these days. People are crazy about this new game. Cute wingless birds and the green pigs captured the attention of many fans all over the world. Angry Birds Game was voted being the best game application on April 2011 in London and become a big winner during the Appy Awards.

The reason why this game became popular is because of its simplicity. The birds game has simple modes that can easily be understood and follow. The players will only need to drag the slingshot, target and release. The villain green pigs are hiding in different places with materials like ice, stone and wood walls. The aim of the Angry Birds game is to destroy the green pigs.

The game has several levels and it will only take you a couple or two minutes to finish one level. However, as you are progressing, the levels will become more difficult. The game also has clear edge with the cute birds as well as green pigs. The wicked pigs were designed to be lovely. To add more with the cute designs, they also have attractive colors that are very well combined together. For every level, you will notice different looks and settings. That makes Angry Birds Game suitable for young and adult players.

In addition to that, the Angry Birds Game has launched plenty of holiday versions. For every new season, 15 new levels are also being added. Throughout the game, players can collect lots of colorful eggs. Discover the best is that green pigs are much cuter with bunny ear hats. Angry Birds enthusiasts are always anticipating the latest season which is certainly filled up with delightful game.

Consequently, the Angry Birds Game is an excellent choice for us all to relax and play with these cute little birds and pigs. The particular layout and video game function help make this game recognized and loved all over the world. When Rovio, the maker of Angry Birds ventured into film making, Angry Birds fanatics increased in substantial number. In the movie-making business, promotions and publicity is being taken seriously. The extent of the lengths of the advertisements provided for the Angry Birds Rio was quite huge, it made the game even more famous not only to the already admirers of the game. But it was made known to those who haven’t heard of the game fame. It proved this decision has helped a great deal on spreading the already ballooning popularity of Angry Birds Game.