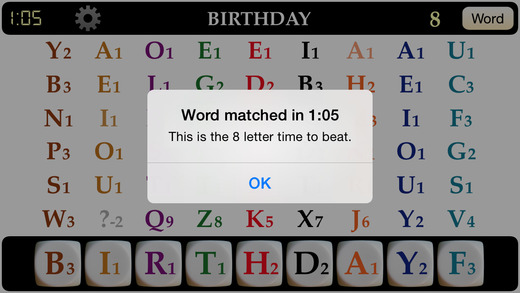 What comprises 9 alphabetic dice which can be combined in millions of combinations?

The answer is Dicewords for iOS. Dicewords is often unpredictable and always great fun, strengthens your vocabulary and gives your brain some exercise. This Universal iOS app, an electronic reinterpretation of Graham Lipscomb’s popular DICEWORDS offers a balanced blend of strategy and luck which can also be very effective as an educational tool.

On each turn you have up to three rolls in which to build the highest-scoring word you can, so typically you keep (or “hold”) some dice and re-roll the others, aiming to get the letters you need. It’s best to have several word ideas in mind because you never know which letters will come your way. Longer words will usually score you more – and if you can use the high value letters then you can get really big scores! There’s much more to this game than lucky dice rolls though. A feature unique to Dicewords, and central to gameplay, is the ‘Dice Table’ which shows all the faces of each dice at a glance enabling you to weigh up the odds of rolling particular combinations – and therefore use strategy to improve your chances.

The interface to the game is intentionally simple – most of the screen is occupied by the dice and the Dice Table allowing you to focus on what matters – just as in the original physical dice game. Interaction is simply by dragging or flicking the dice left or right and tapping or swiping a dice to “hold” it.

The game can be played solo or with up to 7 other players, the in-game clock being very useful during a multiplayer game to ensure that the game moves along at a fair speed. The clock can be turned off during a solo or multiplayer game as the aim is to make the highest scoring words possible, not to race against the clock. At the end of a game the average scores are calculated and displayed – this is the true measure of your skill at Dicewords. The app takes care of the scoring and automatically prompts the next player to roll. Words can be validated against the standard iOS dictionary if installed or each word can be approved individually.

If you fancy a “beat the clock” challenge then flip the screen and play against the built-in Puzzle. The familiar screen operates differently in this mode where you now choose a word, from an available 150, which you aim to spell in the shortest time possible by tapping the letter you want in the Dice Table which “rolls” that dice. Some words can be spelled quickly but the majority require rather more cunning and on the way you will learn more about the Dice Table so improving your game when playing Dicewords itself.

Settings allow configuration for number of players, length of puzzle words, game clock, time per turn and number of turns. Full instructions and game play hints are included within the game and there’s an optional “Extra Help” setting to get you started.

Dicewords runs natively on the iPad too which is the nicest way to play with friends as it’s much easier for each person to watch the way the game is being played. Dicewords also takes advantage of Apple’s latest 64-bit chip if present.

And unlike the original game, you won’t lose any of these dice under the sofa!